This series of posts tells the story of my trip to Iona in July 2015 with 3 other artists and a film crew. We went to explore an idea we call ‘Wild Curating’ and the background to this project can be found here and part 1 of the story here.

It was said of the American poet Anne Sexton that she lived her life with all her nerve endings on the outside of her body. Having spent two separate weeks on Iona, two years apart I could sense the different way of being in that place when I went to make art. The first time I went was certainly a powerful 7 days but I went with the nerve endings on the inside of my body. On this second visit the experience was different. To engage deeply with the place: the landscape, the history, the people in order to make art I had to remove my skin. Then the nerve fibres crept out as cautious tendrils sensing, drinking in and entwining with the reality of the place. Like a soul antenna quietly and slowly tuning in to the deeper story. This is a listening much deeper than words that ultimately lead to a dead end but which are so often a beguiling place to hang our experience on.

One of the things I love about working alongside other artists is the way in which they affect the way I make art. Not in the sense that I try to copy their work but, with nerve endings outstretched, each person’s unique sensibility has an effect on my own experience of a place and the way in which I express that experience. The day spent with Elisabeth and Atle in the white circle challenged me to strip everything down. Their simple intervention in the landscape seemed to focus the latent beauty all around and to open up a sacred space.

I would go with the idea that every place has the potential to be sacred. But that this potential needs opening up or earthing. The soul antenna needs to stretch out and pick up the latent presence of God just as the radio mast hears and expresses meaning from the electromagnetic buzz all around us. It seemed to me that the white circle acted as just such an object: a sacrament, a physical manifestation of a deeper reality. The circle earthed and expressed the sacredness of the place all around.

And so, putting aside my elaborate plans for grand pieces of art, I sat and waited in silence. Waiting for grace to lead me to that simple intervention, a physical action, a real and solid thing that could be an antenna of the soul. This would not be something loud, but quiet, not a blaze on a hillside but hidden.

My walking was a meditation and my seeking was a prayer. I found a cleft in the cliffs by a sandy Atlantic beach. Clambering over rocks I pushed my way through to the end of the fissure where I found the spot to place a soul antenna.

The secret chasm was like a chapel of prayer with a fallen boulder for an altar and I made a circle of gold on the rock. Real gold. Icon gold. 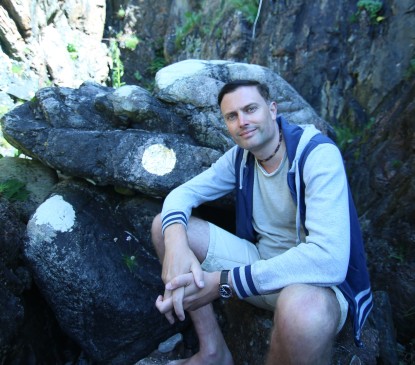 As I sat in silence I wondered what was meant by this simple thing and I thought of the Celtic cross which is so central to the aesthetic of the Christianity in that part of the world. Remove the cross shape and a circle is left. Remove the identifying mark of my specific faith and something universal remains. It would have felt wrong for me to the mark the landscape with a cross in order to claim the ancient rock for a particular creed (And the cross has indeed been abused in this way ever since the Emperor Constantine held it as a banner for his armies).

The soul antenna is not about conquest but a gentle revealing. The circle includes rather than labels and divides. The circle is the universal: the whole world, the life giving sun and the dark heart of the black hole where the universe ends. It is the iris in which we see the soul when we hold another’s gaze.

The sun tracked across the sky and the light shimmered on gold as if on fire. Time flowed, and as the fissure fell into darkness then the circle shone, reflecting the faint light of latent twilight. 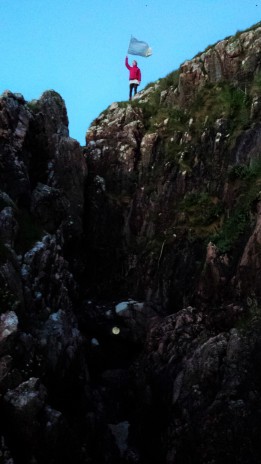 Twilight, and Naomi waves a flag on the cliff top as the gold circle shines in the shadows