Who knows what goes on down in the deep recesses of the soul but now and then ideas bubble up from the depths. I can only assume that these emerge from a combination of circumstance and Spirit: a mixture of the place we are in, the people we are with and the state of our own being. Some of these ideas seem exciting for a moment but as I mull them over they fizzle out over hours or days and it turns out that they were just bright, shiny things with no real substance. But occasionally an idea takes root that just won’t let go. These are the ideas that haunt me at night with their scope and audacity, that burn like fire in my bones until I can’t keep it in any longer.

This is the beginning of the story of one of those ideas.

During the summer of 2013 I was privileged to lead a retreat at Iona Abbey.

Just 6 miles long and 1 mile wide the Island of Iona off the coast of Mull has been a site of spiritual significance and source of inspiration to travellers from across the known world for thousands of years. It is a rugged and treacherous landscape with spectacular views across the sea to distant islands.

Sacred sites on the island date back to pre-Christian times, the most significant of these being the Abbey established by St Columba in the 6th century AD and restored in the 20th century it’s graveyard is the resting place of Viking Kings. For centuries it was a hub of creative innovation who’s influence stretched far and wide. Today pilgrims travel from every part of the globe to stay in the Abbey and spend time finding space for reflection and spiritual sustenance in this remote place.

As part of the retreat we took a pilgrimage around the island and as we walked I talked to Elisabeth, an amazing ceramic artist from Oslo. We talked and dreamed and began to wonder what it might be like to curate and exhibit art in the wild spaces on Iona.

When I returned home I thought that this was probably one of the exciting but impractical ideas we often have when we’re in wonderful places and get carried away. But as the months went by the idea put down roots and so, very cautiously (because with the green shoots of a seedling idea the slightest critical word can crush it before it has seen any life) I began to talk with others about it.

There have been so many practical obstacles to consider but one by one they were overcome. At each point I was secretly hoping that the door would shut on the idea once and for all because, however this turns out, it’s going to be a tough project to pull off but the restless, joyful and generous creative energy has kept gently moving us forward. 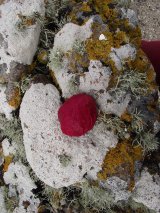 So this is where we are: Elisabeth and I along with Atle Naesheim from Norway and Naomi Gordon; an artist who works with me in Sheffield, will be travelling to Iona at the start of July along with a documentary film crew. We will go in order to make art and curate an exhibition outdoors in the midst of this spectacular and forbidding landscape seeking to explore the questions that Robert MacFarlane proposes in his book “The Old Ways”:

“There are two questions to ask of any strong landscape. Firstly, what do I know when I am in this place that I can know nowhere else? And then, vainly, what does this place know of me that I cannot know of myself?”

The film makers will chart the physical, creative and personal journeys that the artists make as we wrestle with these ideas; some of us encountering the landscape for the first time and others returning with powerful memories.

I have no doubt that there are still significant challenges ahead, plenty of physical and practical stuff as well as the creative work itself. And whilst the creative energy gives me life I do feel a sense of trepidation and the prospect of spectacular failure is very real.

Nevertheless, it is worth trying, it is worth seeking to do something beautiful, risky and wonder-full in this world that so often focuses on efficiency and judges value by economic worth. Creative adventures are adventures of the soul and I hope this will inspire others to set out on new paths and not to ignore those terrifying and vibrant things that, if we take time to listen for them, drift upwards from the depths of our being.

One of the practical obstacles we face is finding finance for the project. We already have generous contributors covering our accommodation costs but we are seeking funds to cover travel expenses for the artists and film crew as well as equipment costs. If you would like to and feel able to contribute then email me at rjstott@hotmail.co.uk and I will send you details about how you can contribute. Thank you.

I will keep my blog up to date with our progress. 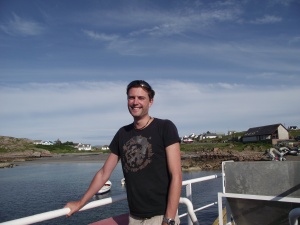 Here I am setting sail for Iona in July 2013