Now and then I stumble across a piece of art; an image, a film, a song, or some writing that catches in my soul. Recently the poems of Anne Sexton did just that, particularly her piece “Rowing” which you can read here or, better still see her anthology “The awful rowing toward God” in which she wrestles with her longing for God which is never satisfied. Sexton opens her soul to us and has been described as someone who lived with “all her nerves on the outside of her body”; in her writing she is completely exposed. 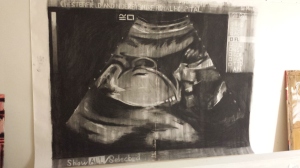 There is a neat and trite Christian response to Sexton’s honest struggle: that Jesus brings down all the barriers that separate us from God and so we have full access to the divine and no longer have to engage in that painful wrestling with an unfulfilled desire for God.

Many years ago I led a Church group in a labyrinth service, where participants are invited to walk the winding path of a labyrinth. Unlike a maze there is only one path so you can’t get lost, but at times the route seems to be taking you further away from the goal rather than towards it. At the centre of the labyrinth they were then invited to offer a prayer and light a candle or something (it was a long time ago so I can’t quite remember but it’s a fair bet that candles, or maybe pebbles were involved somewhere along the line). One member of the group, when it was her turn to walk the labyrinth, eschewed the carefully drawn out path and walked straight to the centre to offer her prayer. Afterwards she pinned me down (conversationally, not literally) to tell me that she had always been taught that Christians have direct access to God and so she didn’t need to walk the winding path.

Whilst I understand her response, and I’m not criticising anyone if that is their honest experience of God, there’s something about it that  doesn’t ring true for me, it  doesn’t correspond to my experience. Rather than being able to confidently stride to the centre of the labyrinth I’m with Anne Sexton, rowing hard “as the sea blinks and rolls like a worried eyeball” but still longing for that glimpse of God in the ordinary places, those places that have all the “flaws of life and the absurdities of the dinner table”.

I wonder whether to embrace God is actually to embrace that eternal, unsatisfied longing. And more than that, I wonder whether all our desires: for food, status, success, companionship, sex and so on are actually smaller tributaries of this wider river. All echoes of that deeper longing at the heart of our existence.

Not that there’s anything wrong with fulfilling our desires for these lesser longings but that to stop there when, for example, our hunger for food or sex is sated is to miss out on something greater and deeper. The culture of consumerism has tapped into this and is mining it for all the money it can; there’s nothing intrinsically wrong with buying stuff, but the trick of the consumer culture is to keep us trapped in that tributary of the greater Desire. Certain strands of Christianity also stop us on the journey down one of those tributaries by offering the quick easy answer that “Jesus loves us and everything is going to be OK” (which may or may not be true; but even if it is true it can’t be a conclusion easily arrived at).

Today is the first day of Advent, the season of waiting and longing for something more, something bigger, deeper, more peac-full. I wonder whether that deep peace is found not in the discovery of the object of our desire but in following the tributaries where they lead to the great rolling river of the ultimate Desire and there to courageously set our course with the poet whose story ends with her still rowing.

One thought on ““This story ends with me still rowing””