On Monday I saw the band Sigur Ros in concert. It was an astonishing night. Experiencing live music is different to merely listening to it and the all-consuming experience of that night was overwhelming. 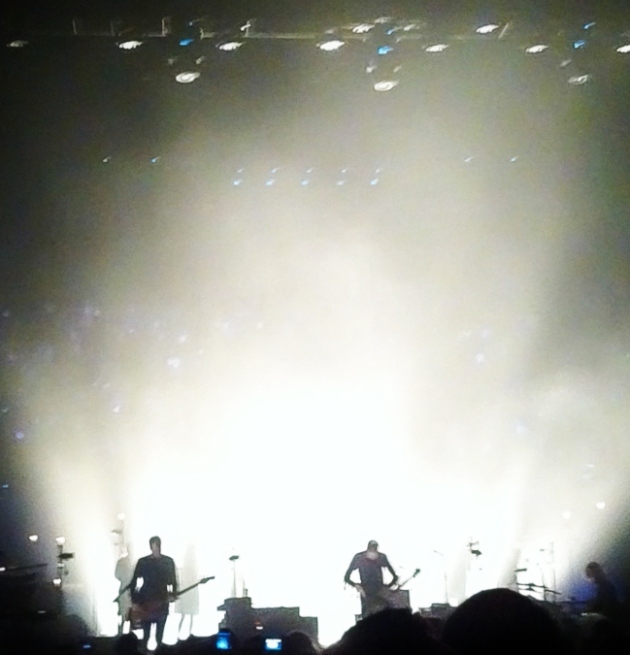 For me their music is made more intense by the fact that their lead singer Jónsi sings in his native Icelandic, or sometimes in his own language that he calls Hopelandic (which in less proficient hands might be unbearably pretentious). Not that it makes much difference anyway as my Icelandic isn’t up to much, whatever language he sings in his voice is like an otherworldly instrument in the mix.

Without coherent words to cling to my ear seeks out the familiar melodies, rhythms and patterns in the music. Their sound is so amorphous at times that this is hard to do but then a recognisable phrase emerges from the maelstrom of sound like a bright tendril of meaning that coils around my soul to draw me onwards and out of myself.

And that’s what I found so overwhelming about the experience: an awakening longing and yearning at once deeply sad and intensely joyful. Words are not the language of the soul. The sounds, lights, and all encompassing experience beckoned to a deeper place that if I’d had the security of words I could sing along to or at least follow in my head, I would never have reached. I experienced something similar a few years ago when I walked the Camino to Santiago de Compestela in Spain. Each night I would attend mass in one of the little churches along the way. As I know very little Spanish this meant that the only way I could connect with these services was to engage with the deeper rhythm of the soul, the enacted story, the smell of the incense, the tone of the prayers and I was drawn to that place beyond words.

It is a human instinct to seek out meaning in the world; whether words at a concert, pictures in the random shape of the clouds or reasons behind the coincidences of life. We seek out stories that make sense of the random series of events that occur each day: bright tendrils of meaning to cling to because it feels as if our life depends on it. In a recent interview about his book ‘The Heretics’ Will Storr says:

“At any given moment the brain is bombarded by what’s been termed a superabundance of information. And yet it has to present us with a coherent version of the world, often by weaving an easy-to-understand story of our lives, complete with heroes and villains. But stories can have a terrible relationship with the truth. We demonise our foes and unfairly elevate those whom we admire, all the while defending our beliefs with often egregiously biased thinking”

When we grasp for these stories then that process leads some of us to religion and others away from it. For me the story that seems to make sense most of the time (although by no means all the time) is a story that includes God, particularly the God that emerges from the Jesus tradition. Sometimes the God/Jesus story makes sense as I fumble for meaning and sometimes it doesn’t but the story is only a signpost to a deeper truth and experience beyond the sparkling and enticing meaning it brings. Just as the music called me onward, outward and deeper on Monday night so I feel the same yearning here.

This relates to the ongoing dialogue between ambiguity and definition I wrote about in the previous post. Our brain needs something to latch on to in order to lead us into deeper experience. But if we stay clinging to that meaning we never get to the place beyond words. It becomes an idol, a false god that feels comforting and secure but ultimately has no power to transform us.

The mistake is to see God as a ‘thing’ to be believed in or disbelieved: just as we might believe or not believe in the existence of the Loch Ness monster or unicorns. It’s a mistake that atheists and theists alike so often make, particularly as they argue with each other. Furthermore, so much damage has been done by those who think that God is a thing that can be possessed and understood. God is no ‘thing’ and when reduced to a ‘thing’ becomes an idol; a bright tendril of meaning that distracts from a deeper truth and a deeper transformative experience.

So, even though I find the God story and the Jesus story meaning-full, which I do more and more these days, I hold those stories lightly because they are pointing somewhere else that is beyond themselves, somewhere far beyond my limited experience. And if I stay too long with these stories and comforting words I’ve fallen for the lie that I’ve already found what I was looking for.