“Portraiture suggests a parallel memory in the universe in which all things persist. Photography touches us so mysteriously because we have an intuition that all things are remembered in some invisible place beyond dreams, where everything that was exists in a sort of universal, divine amber.”

Very rarely a book will bring me to tears, when I read this passage from Okri’s sublime collection of essays I was cut to the heart. It made me cry because, as much as I might like it to be true that somehow, somewhere all things persist, I suspect that this isn’t so. Endings are real and the past no longer exists.

Okri is right that photographs speak to that longing. This is one of my favourite pictures of me: 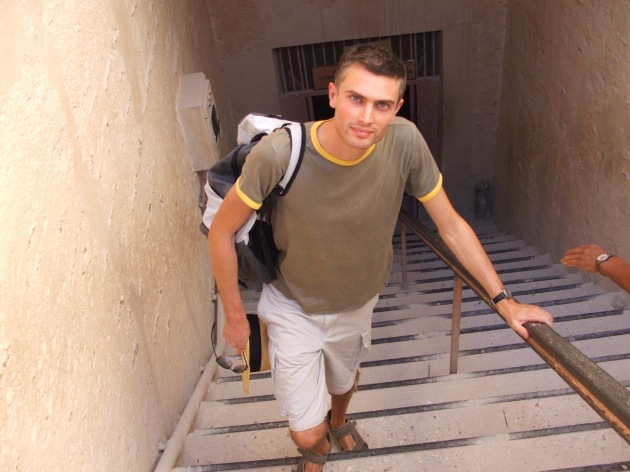 It was over 6 years ago just after I had experienced a nervous breakdown. I was signed off work with depression, and with nothing else to do I embarked on a last minute holiday alone to Luxor in Egypt. I visited the Valley of the Kings on the west bank of the Nile and as I emerged from one of the tombs a guide took my camera from me to take the photograph.

And here I am, the moment preserved, emerging from the dusty darkness. When I look into my eyes I can remember who I was and what I was experiencing and then I think of who I have become and how vibrant and joyful my life is now and I want to tell him that everything will be alright. But that moment is gone and that person no longer exists except as a photograph on the wall and a series of 1’s and 0’s on my hard drive.

One of my art works saw its end recently as well. The street art angel in Parson Cross, Sheffield was demolished to a pile of rubble:

The sadness at its ending is also filled with a deeper and stronger joy. An ending means a story has been told and is now complete. Then I suppose a story lasts as long as it is retold before it fades from the collective memory just as a person’s life fades in the same way.

It seems to me that because of the endings, because nothing persists, then that gives all that we have right now a deeper value. A story that never ended wouldn’t be worth telling. Beauty is found in the fact that it is fleeting and will soon be gone forever.

But grief is real and the sharp pain of loss is real. Maybe that’s why we need to keep faith with the longing that Okri describes: the human instinct that everything somehow is preserved forever.

I don’t know what to believe and who can ever know for sure? This is a place where certainty and self-delusion go hand in hand. But I do know which version of reality is the most painful. Perhaps the joy and tragedy of the universe is that the realisation that endings are real, no matter how much we might long for things to be otherwise, may also be the most beautiful truth.

5 thoughts on “The beauty and tragedy of endings”