A sacred space is a place where you enter a different way of being when you engage with it. This might be in a cathedral, an art gallery or a mountain top for example. When we give ourselves to the moment and the place then we open ourselves up to the possibility of connection: connection with the deeper parts of who we are, connection with each other and the wider world as well as connection with the transcendent reality that some of us might call ‘God’.

For the last few years of my work in Sheffield I have put on art shows in Methodist Church buildings. These were clearly sacred spaces in the obvious, and usual sense. Nevertheless, I hope that the art enabled people to engage with that otherness in a new way, challenging their preconceived ideas of the sacred. With Soul of Sheffield I was determined to explore the idea of sacred/creative space outside of the boundaries of church. I’ve written about this briefly with regards to the installation sole cite here .

So one of the aims of Soul of Sheffield was to explore what it meant to open up sacred space in a very ordinary place: a grey, anonymous office. I didn’t realise at the time (although maybe I should have) that following such a path would bring me up against the issues of power, money and ownership.

Creating sacred space is an act of grace; a free gift. In my previous post I wrote about how the experience of creation has been like standing in the flow, the river of that gift. The truth is, however, that all this has to take place in the real world. And the real world entails, rent, ownership and taxes.

We were fortunate to have been given the space to use rent free, but due to my naivety in these matters I didn’t reckon on the council getting in touch for us to pay business rates. The sums involved were substantial and gave me a fair few sleepless nights as I embarked on a vertiginous learning curve exploring the criteria for charity rate exemptions and the like. The details are dull, but some of the implications are more thought provoking.

A place of worship is not required to pay any business rates at all (and I guess it’s up for discussion whether this is right or wrong as other charities receive a rates reduction rather than exemption) and it seemed to me that what we were creating in the strange and messy space was, from a certain perspective, a place of worship. Unsurprisingly my vague arty/spiritual ruminations were not enough for the box ticking bureaucracy of council rules to even consider this as a possibility but it left me thinking about power and the ownership of places.

Something happened millennia ago when someone first but a line of stones or pile of logs around a piece of land and said ‘this is mine’. The world changed from being somewhere where any place you could reach could be enjoyed, touched and engaged with as sacred space to an increasingly fragmented planet divided into private and public, mine and yours. The walls got higher, the value of the spaces increased and people found that they needed to defend the space that was theirs with sticks or swords or guns or burglar alarms and security guards. And now, even if the owners of a building allow us to use a space then the government can still claim ownership and demand payment for its use.

I’m not saying we shouldn’t have to pay taxes; we have a responsibility to the society we belong to. I simply wonder what this does to the lively, grace-full idea of sacred and creative space. A space that is a free gift and that enables people to joyously and generously engage with the other.

The notion of a free and life giving gift in this way is anathema to a view of the world that divides spaces into yours and mine and defends them to the death; or at least with the threat of court action. Perhaps we have come so far that it is impossible to live without those walls, because the implication is, if I follow this line of thought, that I should keep my front door open and allow anyone to come in and join me on the sofa for a cup of tea, or sleep in the spare room, or…well, treat the place like it was theirs. That idea makes me feel uncomfortable but as I try to follow Jesus I have the uneasy feeling that it’s just the kind of way that he would live, he didn’t seem that worried about owning places: “Foxes have holes, the birds of the air have nests, but the Son of Man has nowhere to lay his head” he said in Matthew’s Gospel (chapter 8v20).

So, I do believe that we should be able to seek and develop sacred space in all kinds of places, spaces that are open to the public as well as those defended behind high walls. But this assertion then leads me to consider how I use the spaces that I consider to be my own. I’m left with no answers, but some rather disturbing questions about the things I cling to so tightly.

Here is the final image in the series. Make of it what you will, but he looks scared to me: 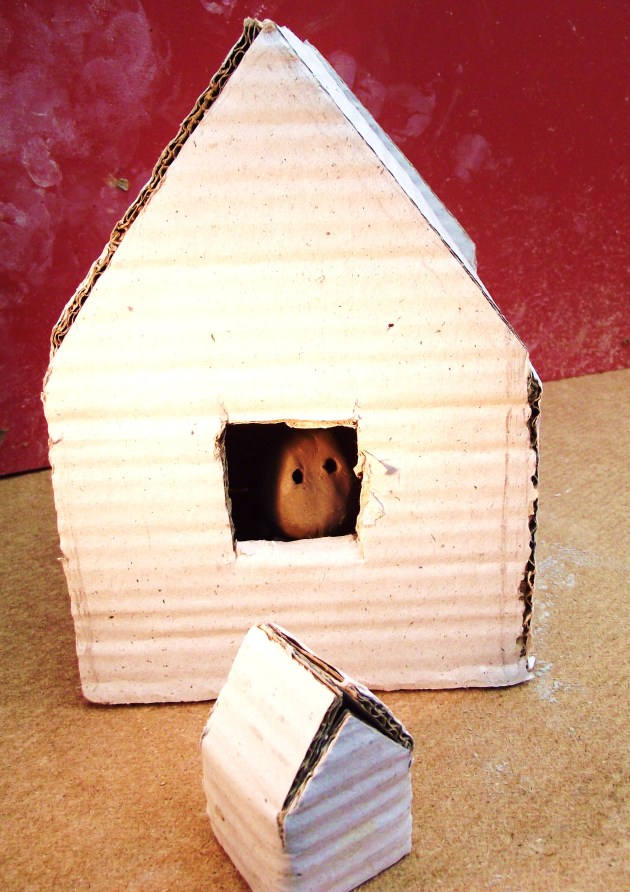 …and a couple of bonus photographs that didn’t make the final cut to be pubished: 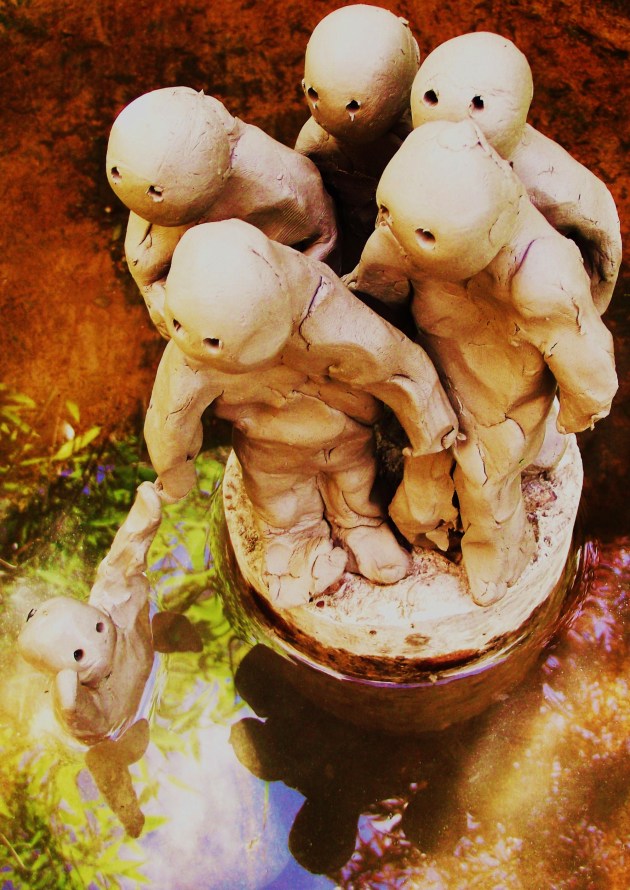 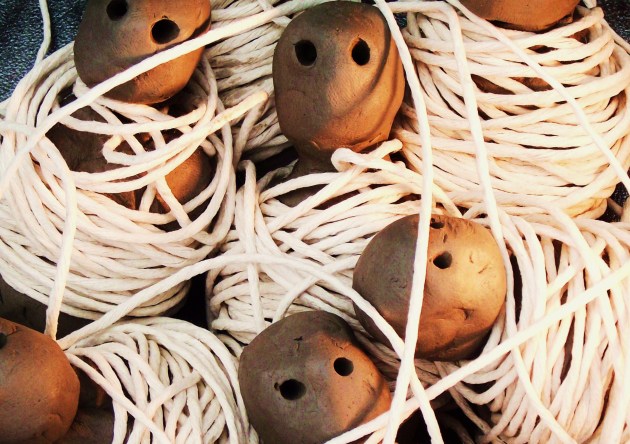 You can get hold of a set of postcards of all 12 of these images here. 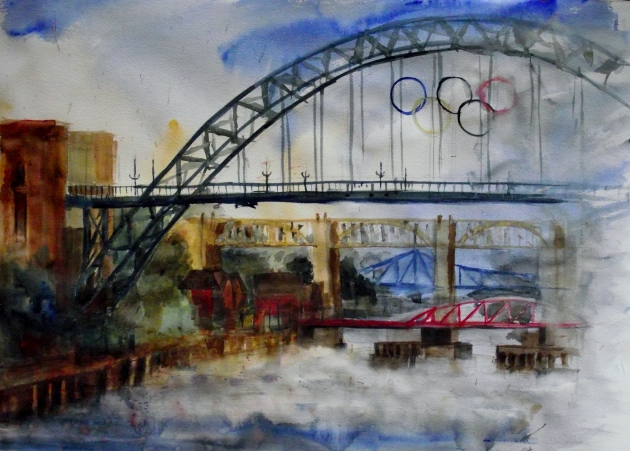 Last week I visited Newcastle to record a video for an upcoming DVD called Disciple12. I was talking about the transfiguration of Jesus whilst painting on the city waterfront.

As I didn’t have much time to prepare the painting I went for watercolour which is the fastest and most immediate medium. Years ago when I first started painting this was how I began but I rarely use it these days. Watercolour is lively and capricious to use – unlike oils or acrylics it always seems to have a life of its own and the skill is in trying to control the beautiful chance moments that occur as the colours spread and blossom across the paper.

After so long making art that I’ve carefully planned and laboured over there was somemthing exhilarating and liberating about launching into a quick bright painting. I didn’t have time to think, just had to follow my instincts of form, tone and colour.

I’m quite pleased with the result. But as always when painting in the open air the most joyful thing is the conversation that comes from passers by. It was a beautiful day and it’s such a friendly city. The comment of the day came from a ten year old to his mum after we’d had a chat: ‘I want to be like him when I grow up’. Misguided perhaps, but still encouraging to hear!

A while back my friend Rob Wylie invited me to contribute a photograph for a project he’s running on his blog called ‘Pictures of Love’.

The image I’ve produced is angrier and more political than I would usually make, maybe it felt safer expressing such a view on Rob’s blog than here on mine! I’m not sure whether or not it makes good art, but it is an honest expression of how I feel about an issue that has a massive impact on my life.

The blog post is here, see what you think.