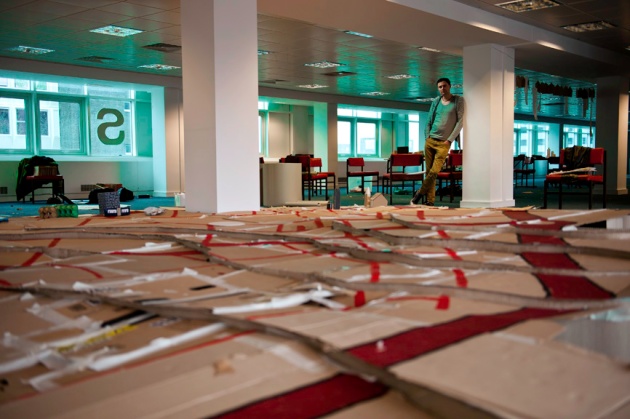 If we stay on the same path throughout our lives, keep treading the same road each day, to and fro, we will never be surprised at where we end up. But there is something about the creative urge, a restless curiosity that seeks out the gaps in the fence that secures the well worn track. It tempts us to squeeze our way through, often on our hands and knees through the dirt, to seek out new paths; even new worlds and new ways of being and seeing.

As I consider the experience of Soul of Sheffield I look around and am surprised at where we ended up. I can remember the first glimpse of that gap in the fence and tentatively exploring, not really knowing for sure whether there was a way though or where it would lead. Of all the ideas that swirl around my brain this was the one that settled, that began to dig in and provoke me into following the path. It reminds me of something the prophet Jeremiah says in the Old Testament:

‘If I say, “I will not mention him, or speak anymore in his name,” then within me is something like a burning fire shut up in my bones; I am weary with holding it in, and I cannot’

Some things just won’t let you go until you act on them.

And so, carefully at first, through conversations over coffee with creative people leading to more concrete actions such as seeking out a space to occupy and then the messy physical work of moving furniture and constructing a vast cardboard landscape; I followed the path that opened up before me. And others joined me on the road because I couldn’t have done it alone.

Looking back on the journey I wonder how much of what happened was due to my own efforts, because so much of the way things worked out seems to be outside of my control. Depending on what you believe about the universe perhaps you think these things happen by luck, and that the luckiest people are those who orientate themselves in such a way to take advantage of the circumstances that happenstance provides. I have some sympathy for this view. But this creative experience has, for me, had more of the quality of gift than simply the fortuitous roll of a dice.

It could so easily all have gone horribly wrong on several occasions. One situation in particular that arose could have led to me, if not losing my job, at least being severely reprimanded. But somehow, it worked. From finding the right space, to coming across just the right group of fellow creative travellers to encounters with people in the media and so on and so on. As I look back on the experience it feels less like a hike up a mountain, with all the forward motion coming from my own effort, and more like white water rafting through the canyons below. Both are thrilling experiences but the latter entails putting ourselves in a place where we lose control and are carried along by the force and life of something so much vaster than we are.

That’s not to say that there’s no choice in the matter: we can haul ourselves to the shore at any time and step out of the flow to make camp. This would make us feel a lot more stable and secure and there were several times during Soul of Sheffield that I felt tempted to do just that. But somehow, through the encouragement of those around me and a sense that, whatever might happen the journey was worth making, I was able to paddle back out into the ferocious heart of the river.

So, is the creative experience luck and chance or gift? A year ago I would have gone with luck, but more and more I’m inclining towards gift. If we can live and be in the world in such a way as to be open to receive that gift then we never know where we might end up. We can never know what risks we might be drawn to take. And, in the end, we can never know what will emerge if we have the courage to be energised and led by that wild creative spirit that can’t ever be tamed.

The Soul of Sheffield project is coming to an end. I will be posting some reflections on our experiences of the process and some of the themes and ideas that emerged very soon. In the meantime here are some images from the final piece: 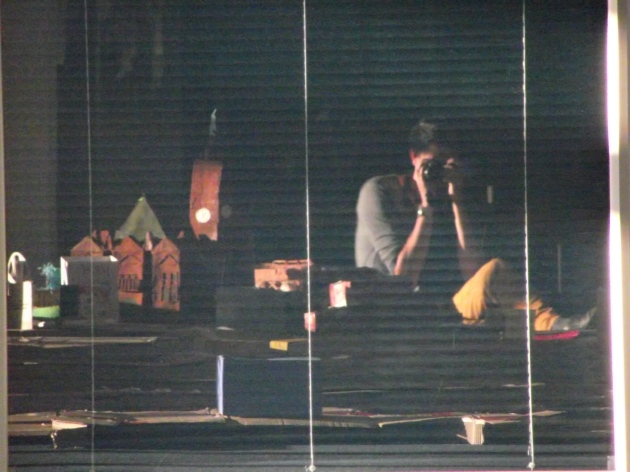 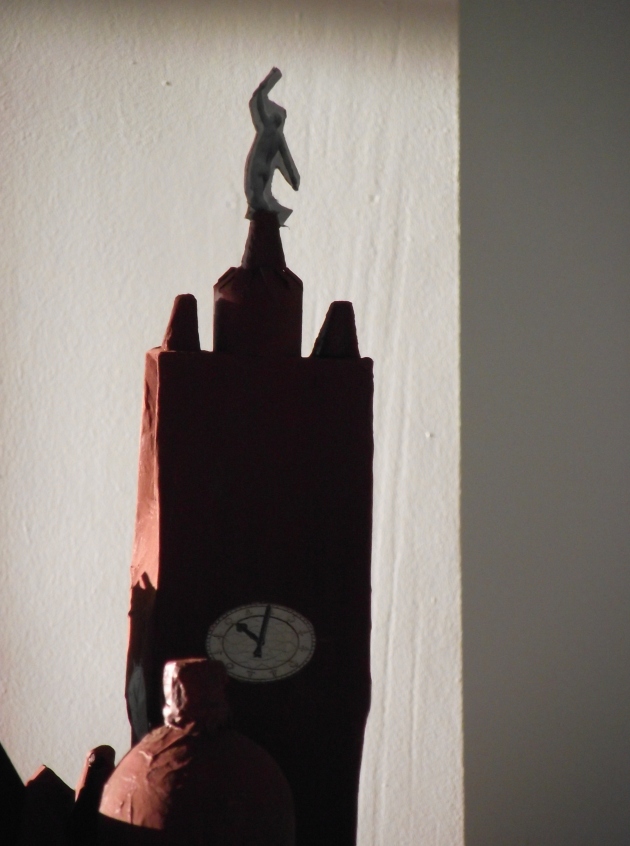 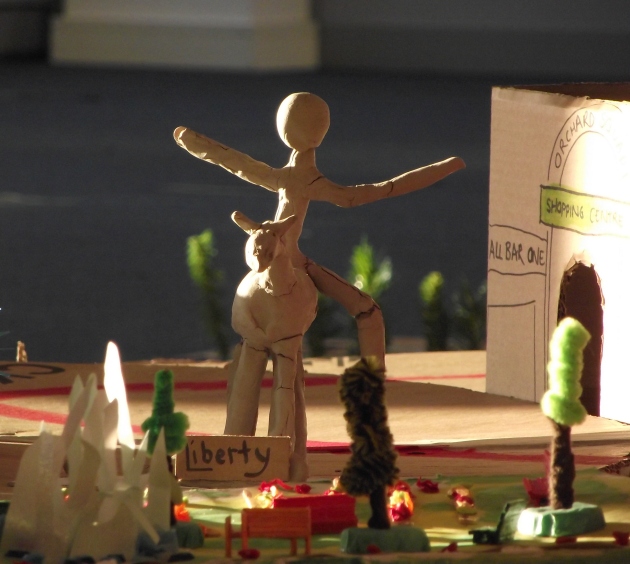 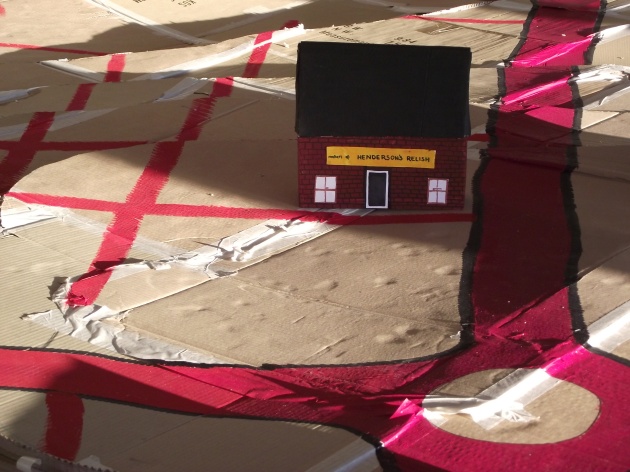 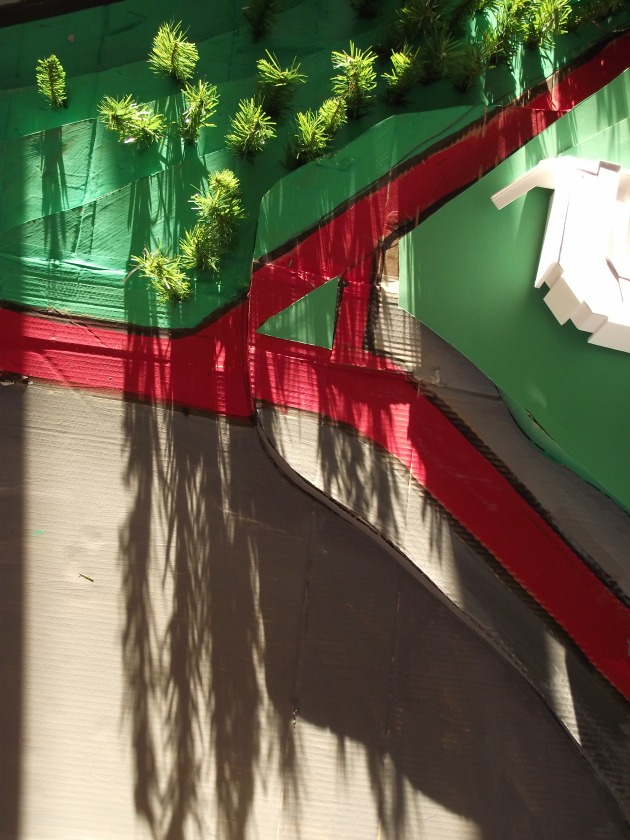 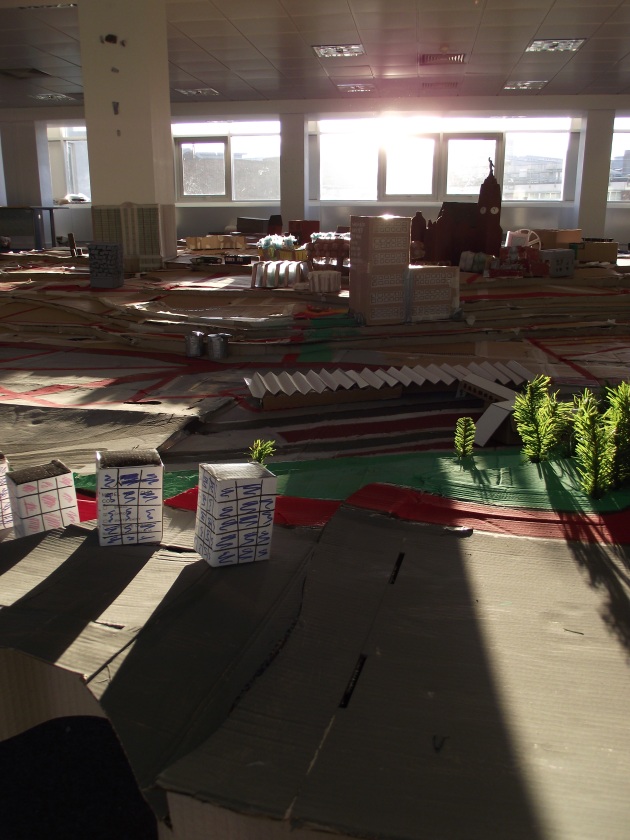 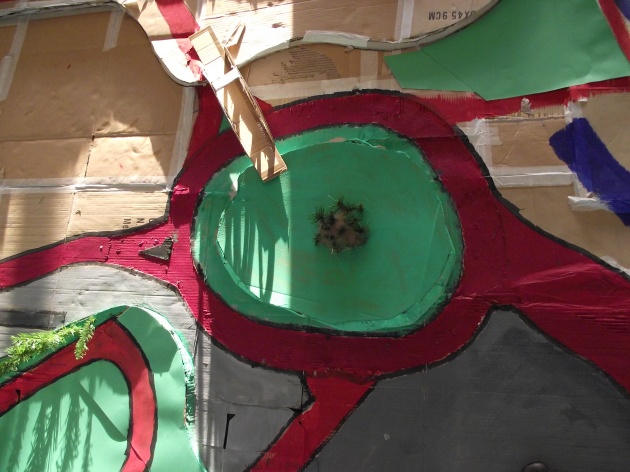 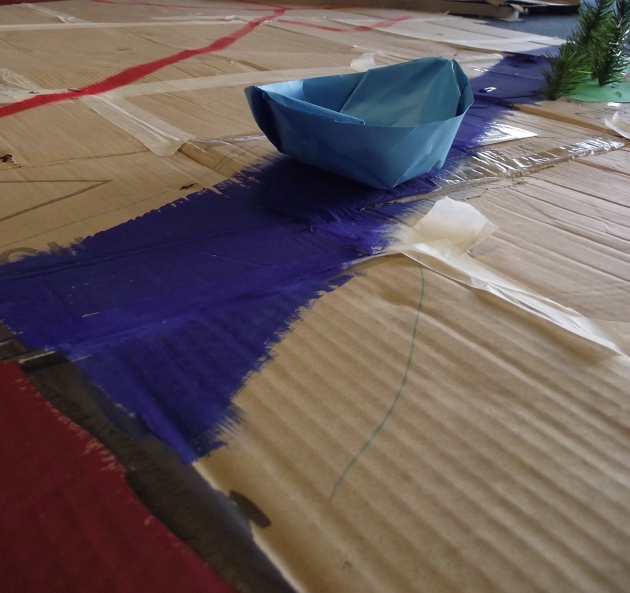 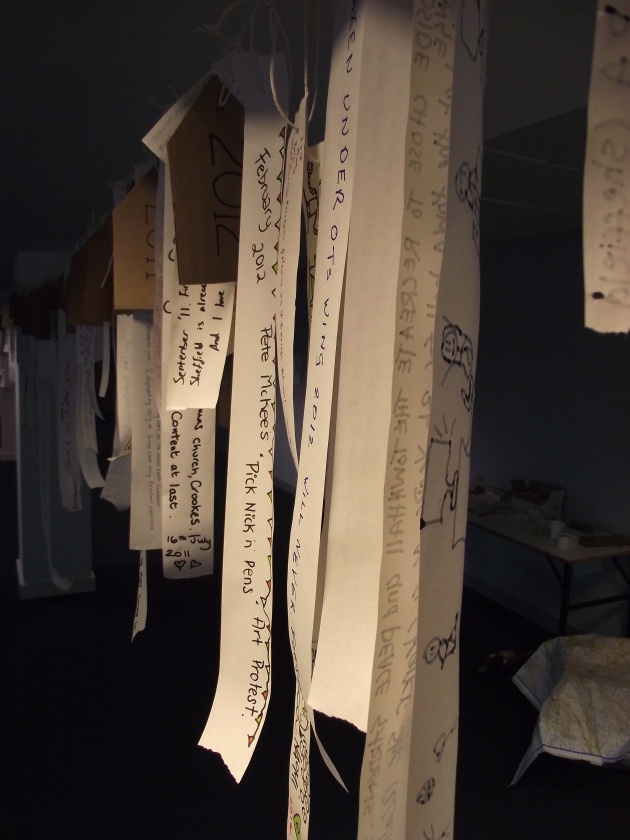 And some images of its destruction: 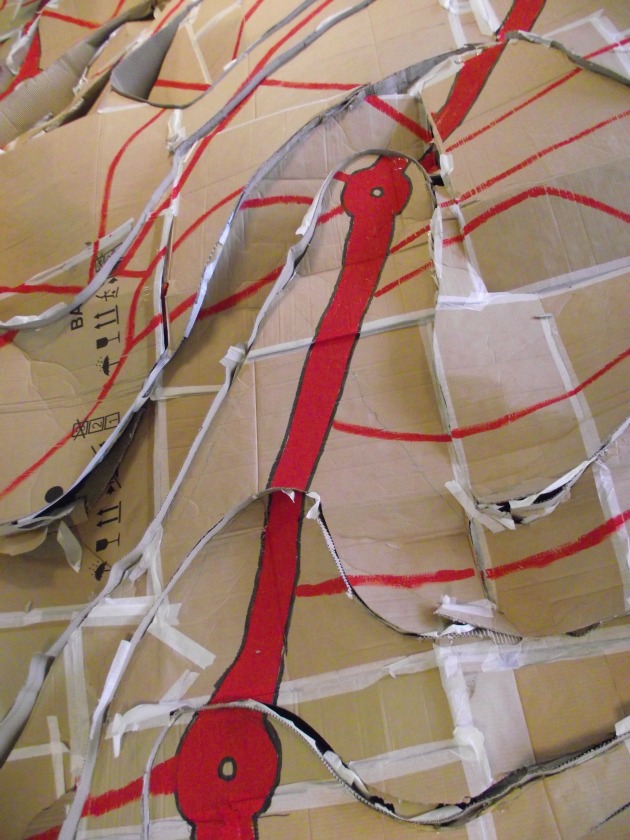 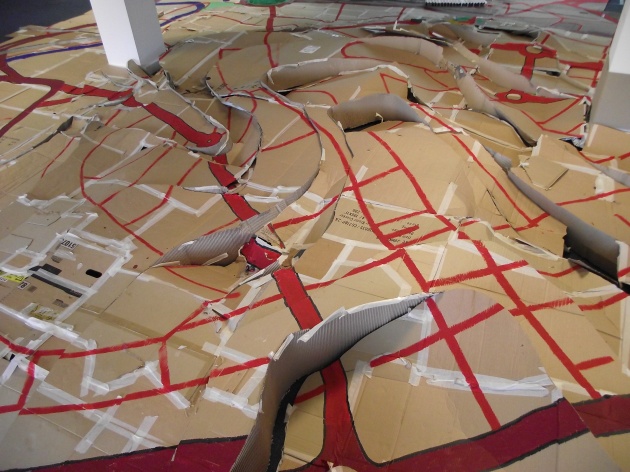 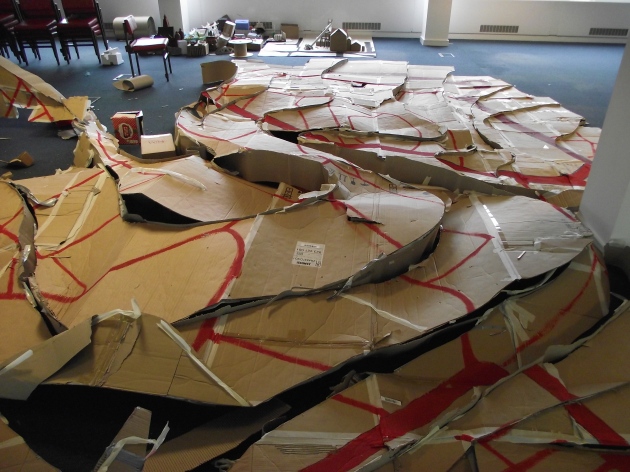 This image makes me think of some extravagant carnival, but there is something sinister about the masked figures and they seem lost. It’s strange how the person looks more vibrant without the mask, like a carnival in reverse.

Then, as the unmasked figure looks up into your eyes, is the expression pleading and fearful? Or daring you to do the same? 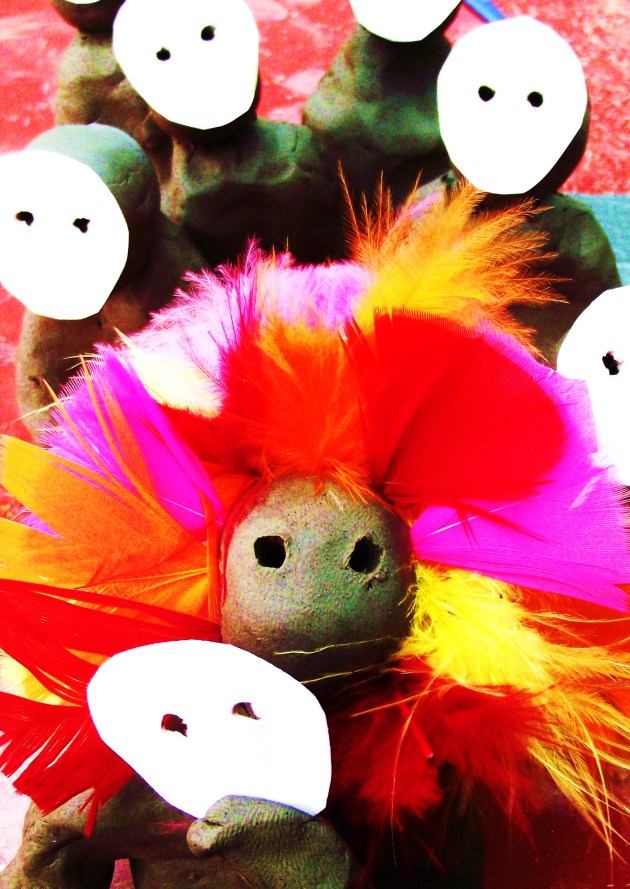 I have produced some art work for the Methodist Church’s annual conference. I was asked to illustrate the story of Jesus meeting two of his followers on the road to Emmaus following his death and resurrection. It’s an intriguing tale and you can read it here if you’re not familiar with it, it seems to me that Jesus acts very strangely throughout. I wouldn’t normally produce work that is quite so illustrative but have found it a very helpful process to explore my reactions to the story through making art.

I am inspired by what happens when we bring the Jesus story alongside the stories of the places where we live in the 21st century. In much of my work I try to explore what it means for the life of Christ to be embodied in ordinary places.

For these three images that explore the story of the walk to Emmaus in the context of my home city of Sheffield I have used wooden boards salvaged from an old cutlery factory in the industrial quarter of the city. There is a beauty in the roughness and brokenness of the materials and I had to wrestle physically with the heavy and dirty boards. Gold edging the cracks suggests beauty shining through in unexpected places and are also reminiscent of the gold used in icons.

I love the process of transforming something that is fragmented and discarded into an object full of story and meaning. Or perhaps transforming is the wrong word here; maybe the process is really a revealing of meaning and beauty that is already latent. However you view the process, I find it compelling to make a piece of work that has its roots in the dirt and grime of this industrial city.

Here are the three images (along with details of each piece), each one is 1.0mx1.5m, acrylic on found wooden boards. 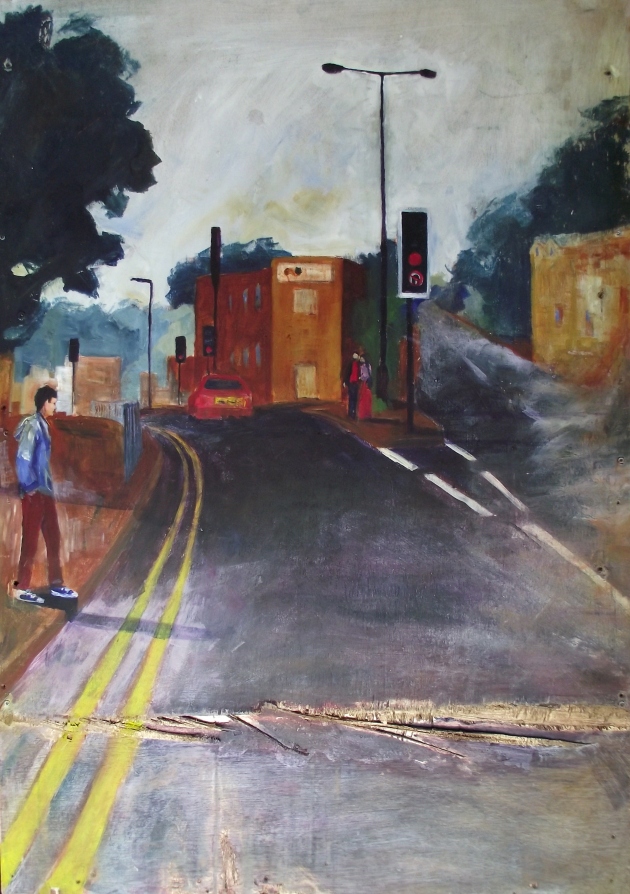 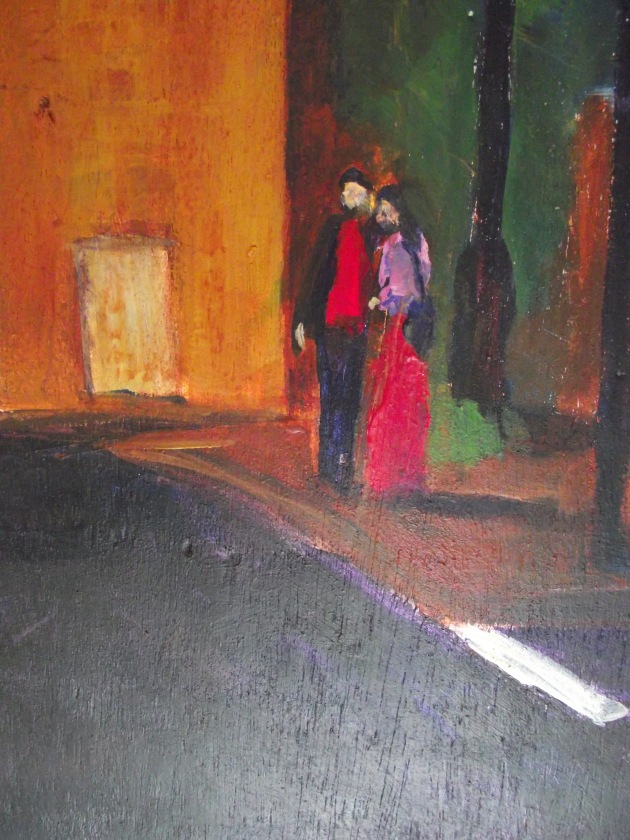 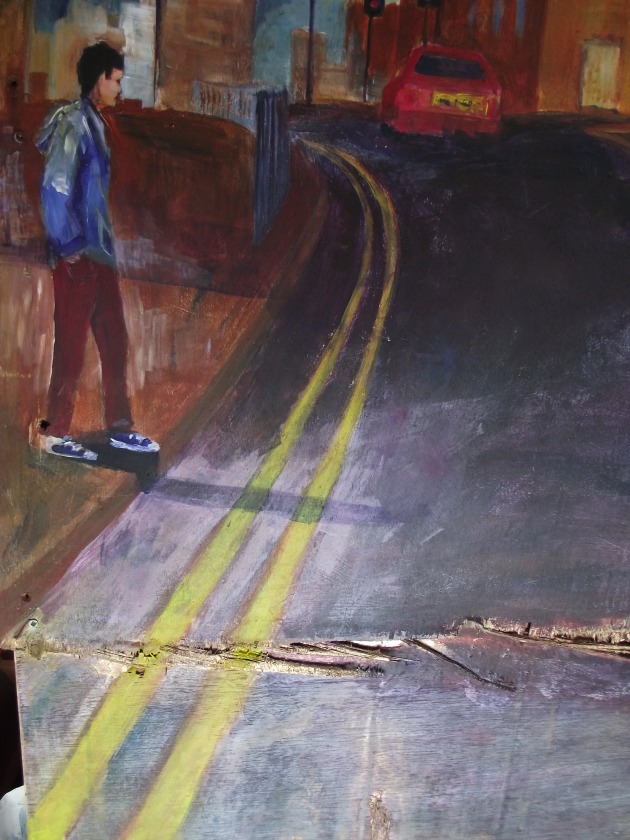 This is Ecclesall Road in Sheffield. The street light seems to echo the cross and the disciples stand in its shadow as a stranger watches from the side of the road. 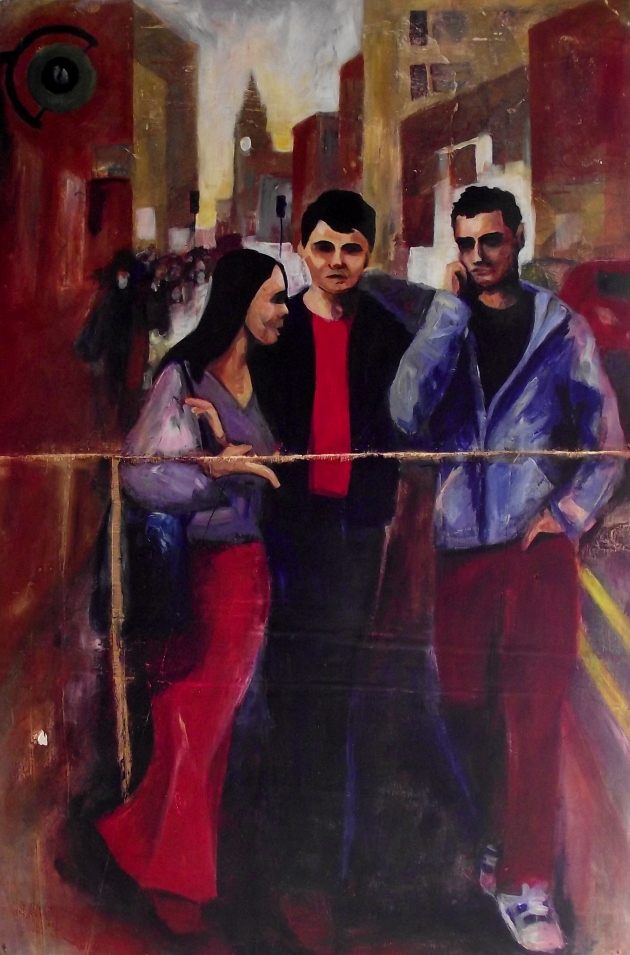 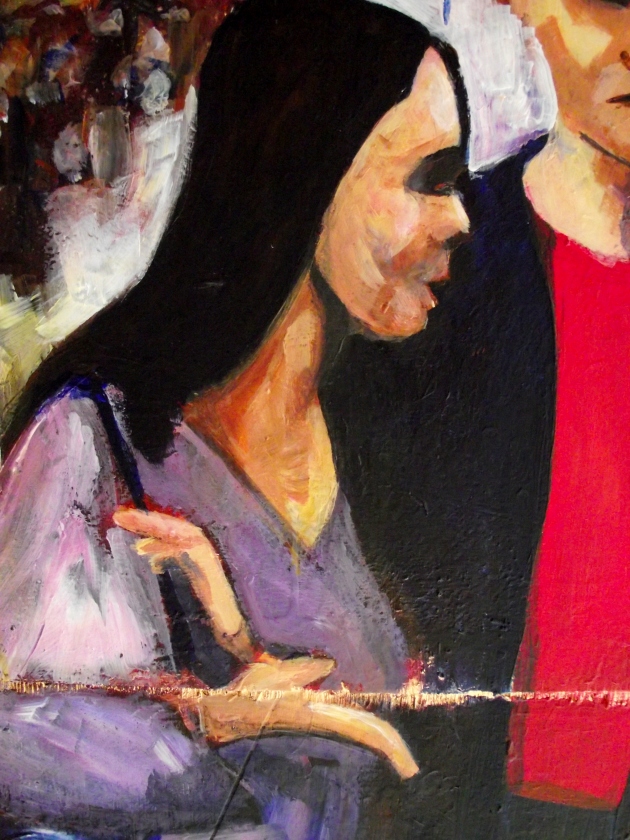 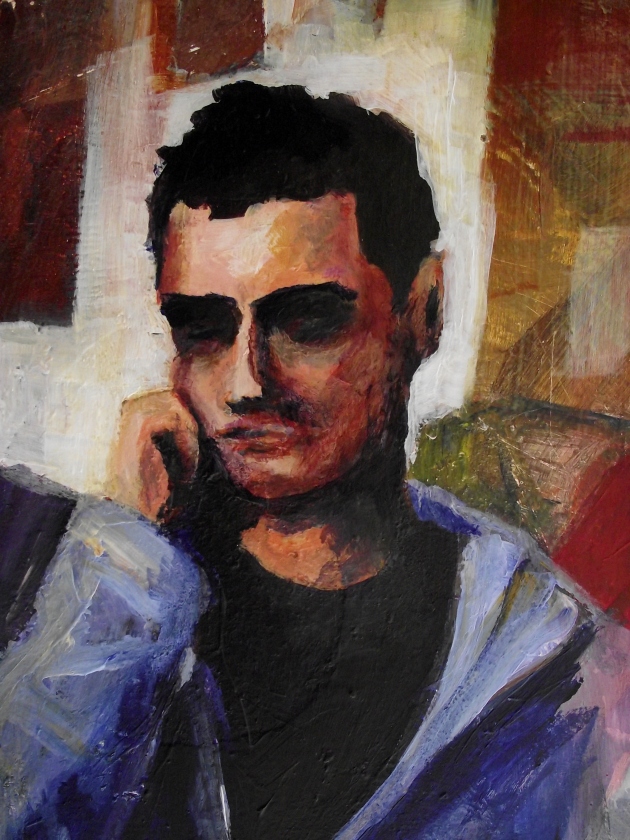 On Division Street in Sheffield City Centre. The three walk and talk together. As I painted this I was reminded of Rublev’s icon of the Trinity. There seems to me to be an invitation to community, an openness to include us in the conversation too. 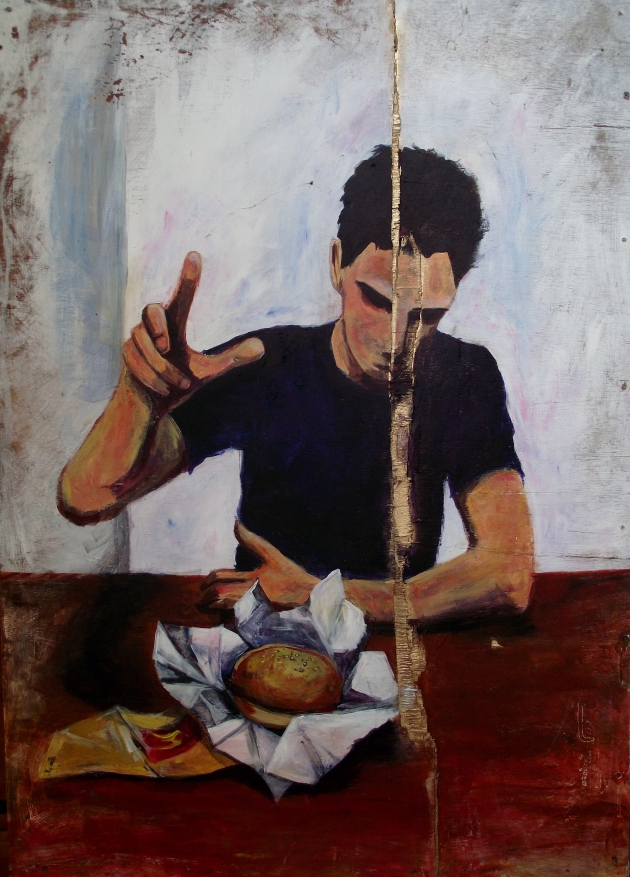 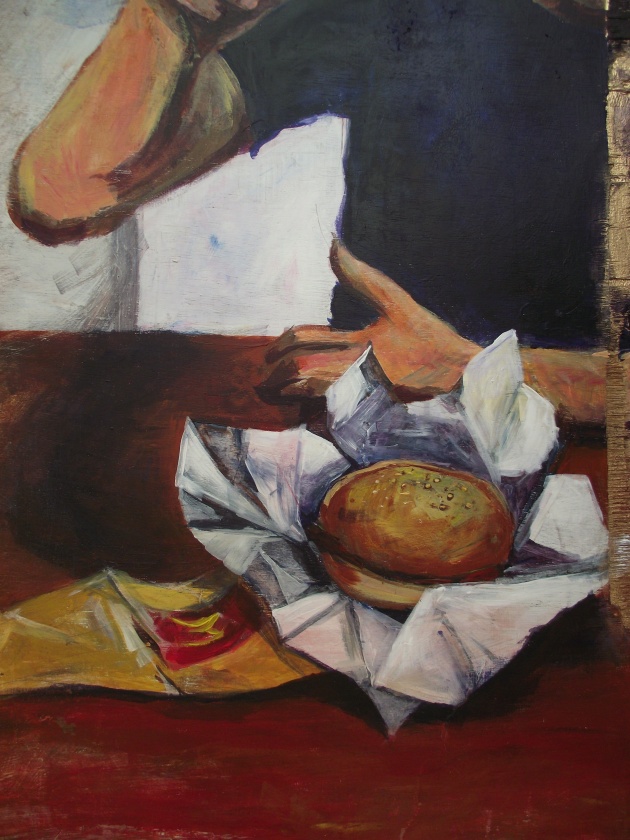 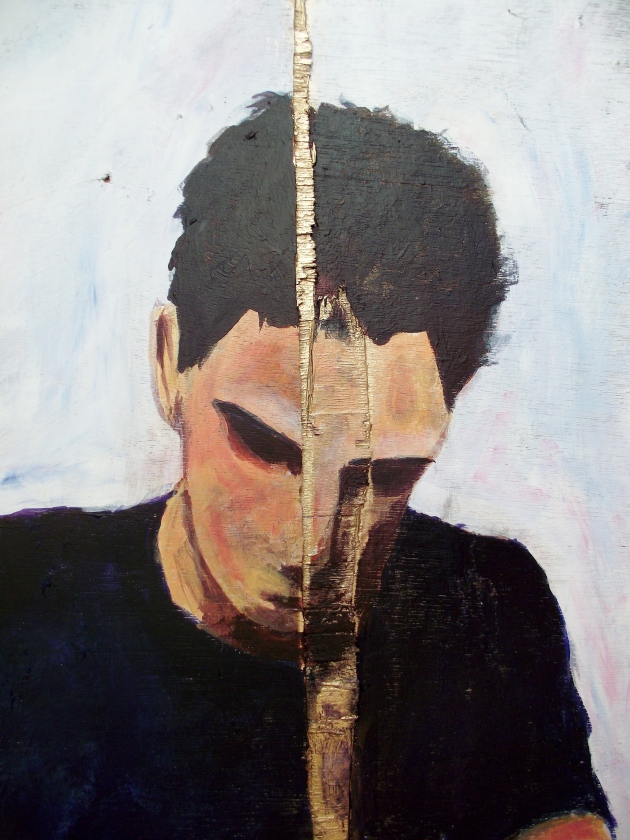 The stranger blesses the food he is offered and the universe breaks open. His pose echoes the figure in Caravaggio’s ‘The Supper at Emmaus’.

This whole story for me is about the revelation and the discovery of the amazing and sacred in the midst of the ordinary. The brokeness is not papered over and covered up but is transformed to become intrinsic to the beauty of the piece.