Thanks for all the encouraging comments for this work both on the blog and emails from across the world – I’m quite overwhelmed that my tentative attempts at street art should draw such a response. 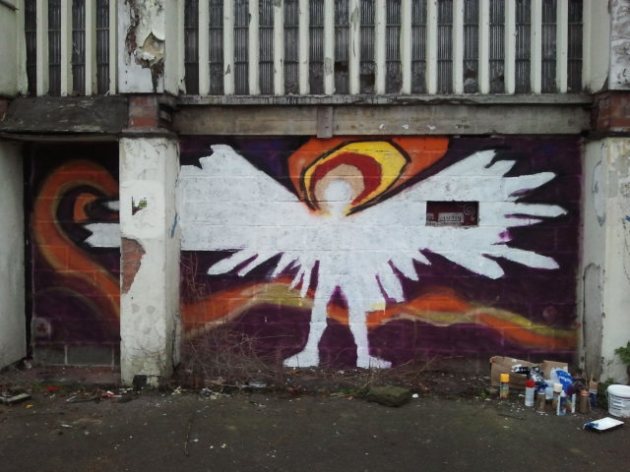 I was quickly approached by a guy from the estate who used to do street art when he was younger and he gave me some great advice as to how I could improve my technique and was kind enough not to criticise the work too much as he pointed out what I was doing wrong. It was great to hear about his exploits as a teenager but it seems sad to me how the creative energy of youth has been criminalised. He also wondered how long it would take the teenagers from the neighbourhood to draw a giant cock between the angel’s legs… well we shall see.

Other passers by were worried that I had come from the council or the owners of the building to paint over the angel – one lady saying how her 4 year old grandson loved it and had to touch it every time they walked passed.

This creative process is an ever deepening experience for me. Nick said that his favourite part of the image was the feet, solid and grounded. I like that, I want the image to be of the place and not imposed on the community. And it is evolving as I talk to the people passing by. My natural tendency when drawing figures is to make them long, slender and waif like (like me) but as time passes this angel is getting squatter and tougher – Nick says ‘It’s as if he could burst out through that wall’