The opening night for the wilderness exhibition went really well – the18 artists involved have produced some amazing work which will be on display until Easter (see www.wilderness-exhibition.com for opening times). For those who are further afield I will post some photos here in the next few weeks.

For the rest of Lent I’m going to be reflecting on the experience of sending out and gathering in the children of clay. Of the 40 sent out 24 survived in various states of decay and deterioration. I have been struck by how people have been touched by the project and now, as I see their remains laid out in the exhibition along with gaps for those who never came back, I am particularly moved. There are so many echoes of our human frailty and resilience.

When I look at the photo of them all laid out in my studio, gazing up with longing eyes at me I realise that when I sent them out they all looked the same. Now, having been exposed to the world for 40 days, they have become individuals – each of them being affected by and taking on some of the characteristics of the environment in which they were left. 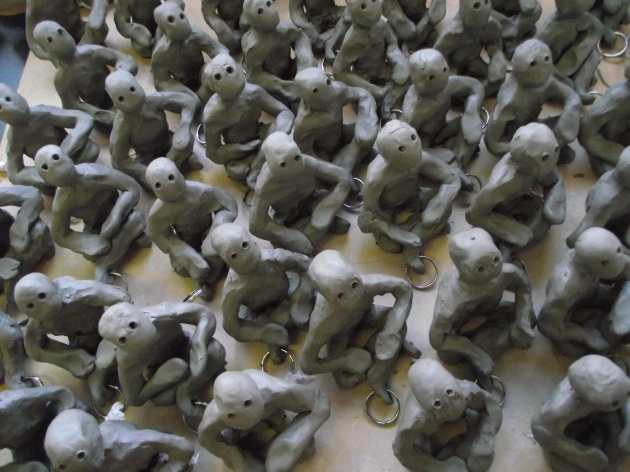 Nature/nurture  blah blah blah – all of that is fascinating and worth looking into. But I am left to wonder whether the person I am is simply the sum total of my experiences and my inheritance; the clay that makes me, in the space where I have lived.

Over the next few weeks leading up to Easter I will tell the stories of some of the children of clay. I couldn’t tell them apart when they left, now they have returned, ragged and changed, the world has breathed individuality into them – and they are teaching me all that they have learned…